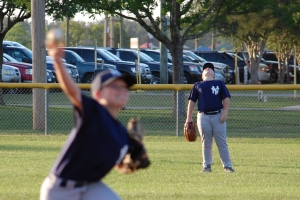 You’ve just gotta love little league baseball!  This photo makes me laugh.  The ball is in the pitcher’s hand, but check out the outfielder.  He’s a kid and we can only imagine what he is looking at and thinking about.

He’s on the team.  He’s got the uniform.  He’s in his assigned position.  He knows his position is an important one.  But since few balls have come his way in a while, he’s lost focus on where the play will be next.  Most of the plays in this game have remained within the diamond so he’s decided to take a little mental break and enjoy whatever happens to be in the sky at this moment.

I know how he feels.  I’m on the Christian team, I have the uniform of righteousness that was given to me, and I am absolutely sure that I am in the position God has for me in this part of the game.  But there doesn’t seem to be much action coming my way.  I know that my position is important, but at times I find myself uncomfortable with the fact that the major plays seem to be happening elsewhere.  There’s not much for me to do except stay in position and wait until He has a play for me.

I never thought I was that good in the outfield.  I am confident in my ability to hit the ball and to run the bases, but I never was very good at catching or throwing.  Or waiting.

Little by little, I am learning how to enjoy the outfield.  The game seems to be moving slower now and I have time to relax.  Perhaps I will be put in a different position at a later time in this game of life.  Or maybe not.  Sometimes it feels like I’ve lost focus on the game because I’m not as involved as I’ve been at earlier times.  Maybe later things will pick up and more action will come my way.  But for now, I think I’ll do what this young man did and just look up.