This year she jumped off the diving board.

What had previously been something she feared became the highlight of her summer.   Once the first jump was experienced, there were not enough hours or days in the summer to fulfill this delightful new freedom. No longer satisfied to play in the shallow end, the diving board held the promise of higher heights to be reached and the deeper waters provided a much greater splash at her entrance.

She’s always loved playing in the water but this has been a gradual process over the last few years.  I remember summer before last when she wouldn’t jump in the pool unless I was there to catch her….until she saw another little girl jumping all by herself.   The simple opportunity to see another little girl be brave was all she needed.  That’s what got her to jump.  She hasn’t taken formal swim lessons.  She’s watched and imitated those who were doing it.  Oh, she’s had instruction from us as we’ve been in the pool with her, but the greatest influences have actually been the other children having fun.

Some children are fearless.  They will jump in the water anywhere, anytime, whether they really know how to swim or not!  We were too poor to have our children in swim lessons, but spent much of our time around water and our small son must have just thought that he would figure it out once he jumped in.  And he did!  But I know he was confident that we were always there.  We jumped when he jumped.  Going swimming was always an adventure!  I was proud of them as I watched them try new things, confident in the water no matter how deep it was.  They discovered the deep was not something to be feared but enjoyed. 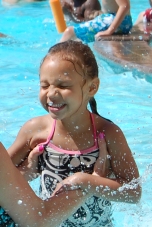 I love watching children learn to swim:  Squenched faces, pinched noses and cheeks puffed full of air.  The hilarious expressions in response to those first cold splashes.  The pride in their faces as they wiped the water from their eyes after those brave head-under-the-water dips.  The comical look of goggles and swim masks on small faces.  The excitement over every new trick, as if they were the first who had ever done it.  And I would have been so disappointed for my children if they had never gotten out of the shallow waters.  Oh, what they would have missed!

God knows what awaits us in the deep.  He knows He will be there with us, never expecting us to jump where He will not be. He is calling to those standing at the edge “Don’t be afraid”.  He prompts us to call to them the same “Come with us, don’t be afraid!”

He lovingly watches as we take those first brave dips and I imagine He smiles as He sees the expressions on our faces upon learning new truths…..Jesus said what??  That is sin??  Love who???…. as if He had just splashed us with cold water. Following Him occasionally has us squenching our faces, pinching our noses, and filling our cheeks and lungs with air in our efforts to obey what He has commanded us to do.  I’m sure many times we appear quite comical.  Yet He takes joy in our excitement with each new level of faith reached, us beaming with pride as if we were the first to ever go there.  With every jump He builds our confidence and strengthens our faith while preparing us for the next jump.

The first time Jesus told Peter to go deeper they were both in the boat.  Peter thought he already knew what they would find in the deep, but he had never been there with Jesus.  He obeyed Jesus’ command and found provision that was overflowing. Better yet, he found a new level of faith that would develop and grow to the point that when Jesus later commanded him to get out of the boat in the middle of stormy seas, Peter did.  (Luke 5 & Matthew 14)

He has called us to a purpose that will take us to the deep.  He longs to take us there, secure in His careful watch over us, if we would only jump in.  He knows what delight we will find, what heights we will be able to reach, and what impact we will have on our world if we will trust Him.  Oh, what disappointment He must feel when we are content to stay in the shallow waters, believing the deep is not for us.

Whether we are those fearless souls that jumped in the deep when we first heard His call, or we are the ones starting in the shallow end with the determination to learn how to get there, the deep is where we find His greatest treasures and the fulfillment of our purpose.

Is it time to jump?  Give your life to Him?  Join that small group study?  Commit to a local body of believers?  Accept the opportunity to lead in bible study?   Sign up for that mission trip?  Obey His command to fast and pray?

What is He telling you to do?  Just jump!

You never know who is watching and will learn to jump too.

Be sure to check out the events tab on the blog site – two new events coming soon!!      🙂